Following the declaration of World Health Organisation about COVID-19 as pandemic, Meetings on the Bridge took the necessary precautions and performed its program online taking into consideration the urgent timeline of the filmmakers attending the MoB workshops with their films and projects.

On the 15th anniversary Meetings on the Bridge, supported by Anadolu Efes 17 fiction and 2 documentary projects and 7 fiction and 1 documentary films from Turkey, Azerbaijan, Armenia, Iran, Georgia, Greece, Kazakhstan and Romania are presented at the Film Development Workshop, Neighbours and Work in Progress. 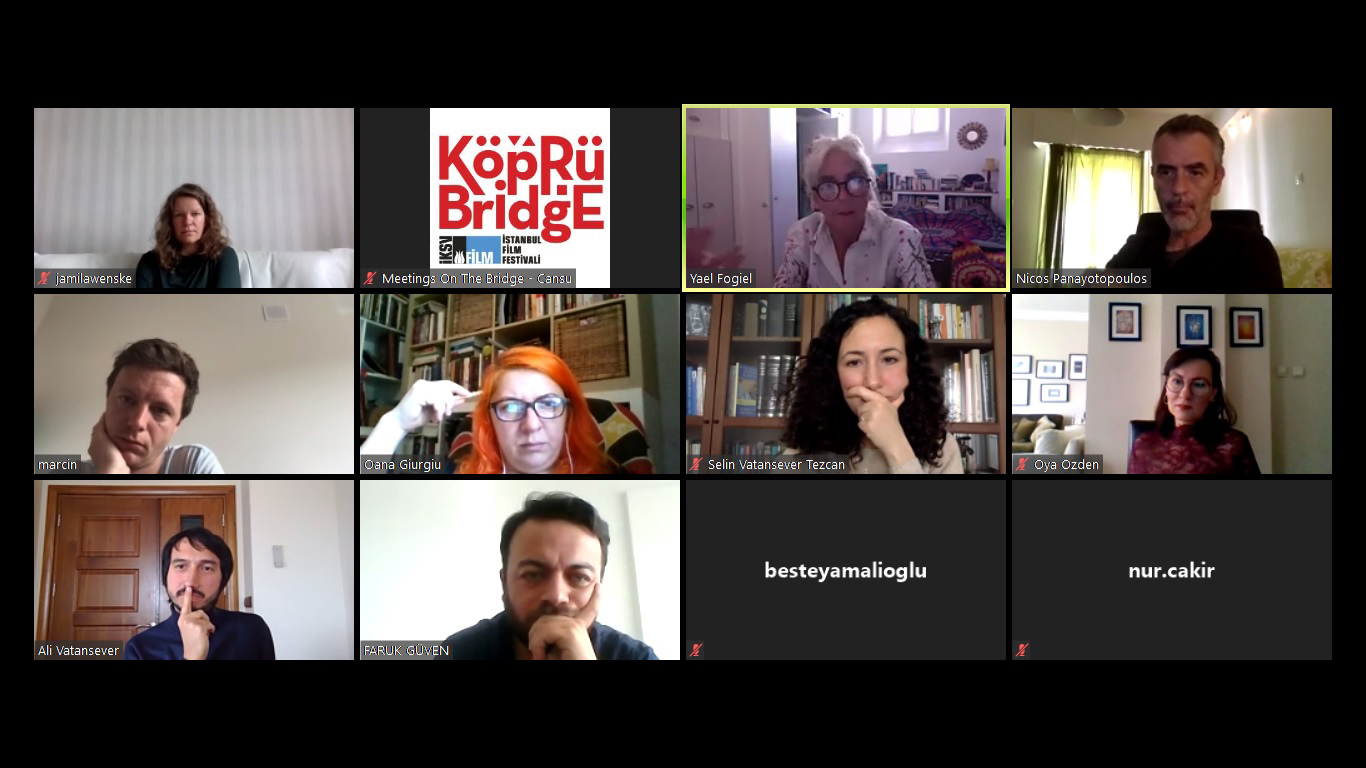 This year MoB is collaborating for the first time with the Turkish Radio and Television Corperation (TRT) to present the 50.000 TL TRT Special Award to a project in development. 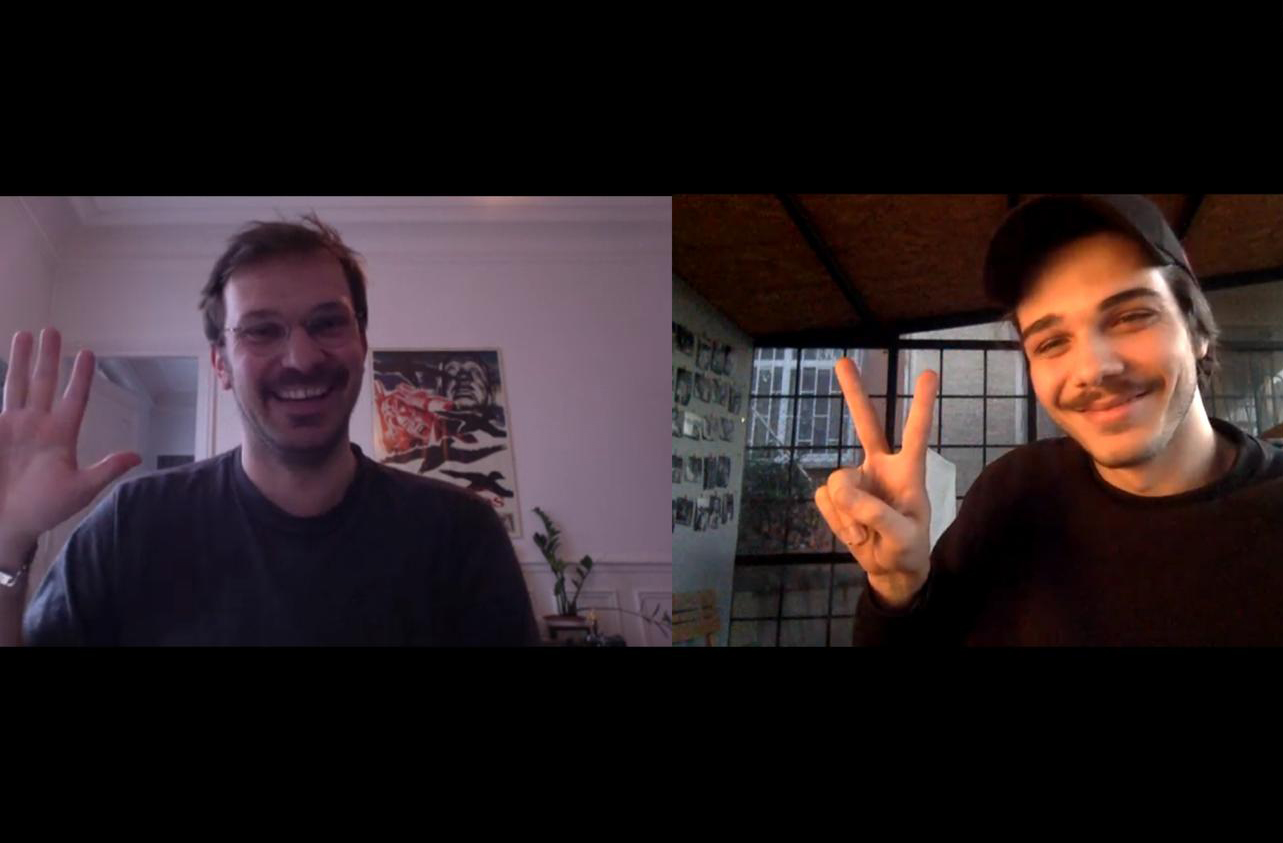 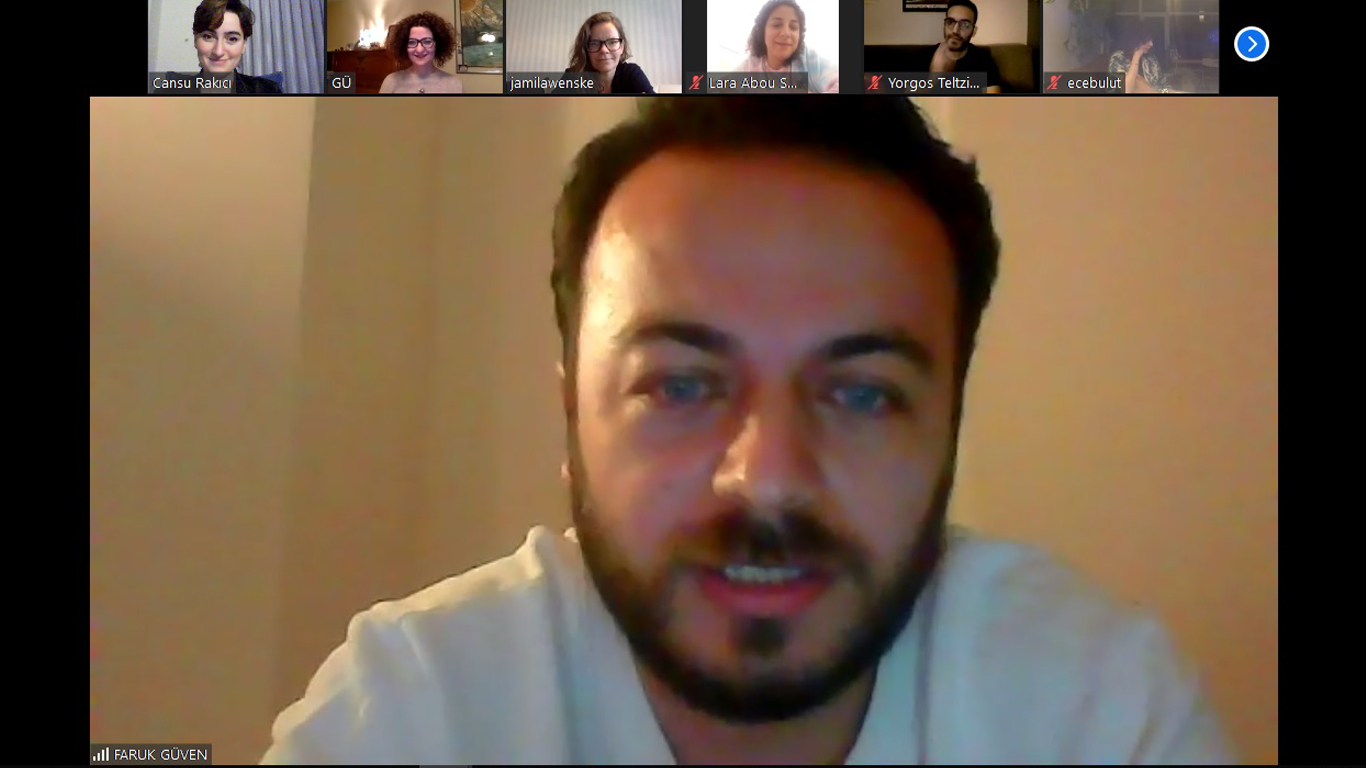 The directors Gözde Yetişkin and Emre Sert and the producers Suzan Güverte and Şebnem Kitiş of the project Grace received the TRT Special Award of 50.000 TL. Jury’s deliberation: The story has a statement that being intoxicated with greed and fear of deceit ends up with losing the real values. On the other hand, besides the story shows us the picture of humanity who asks for more, it promises us to be moral in the end. Besides these aspects, the story’s usage of sarcasm and humorous situation contrast makes it interesting as well. 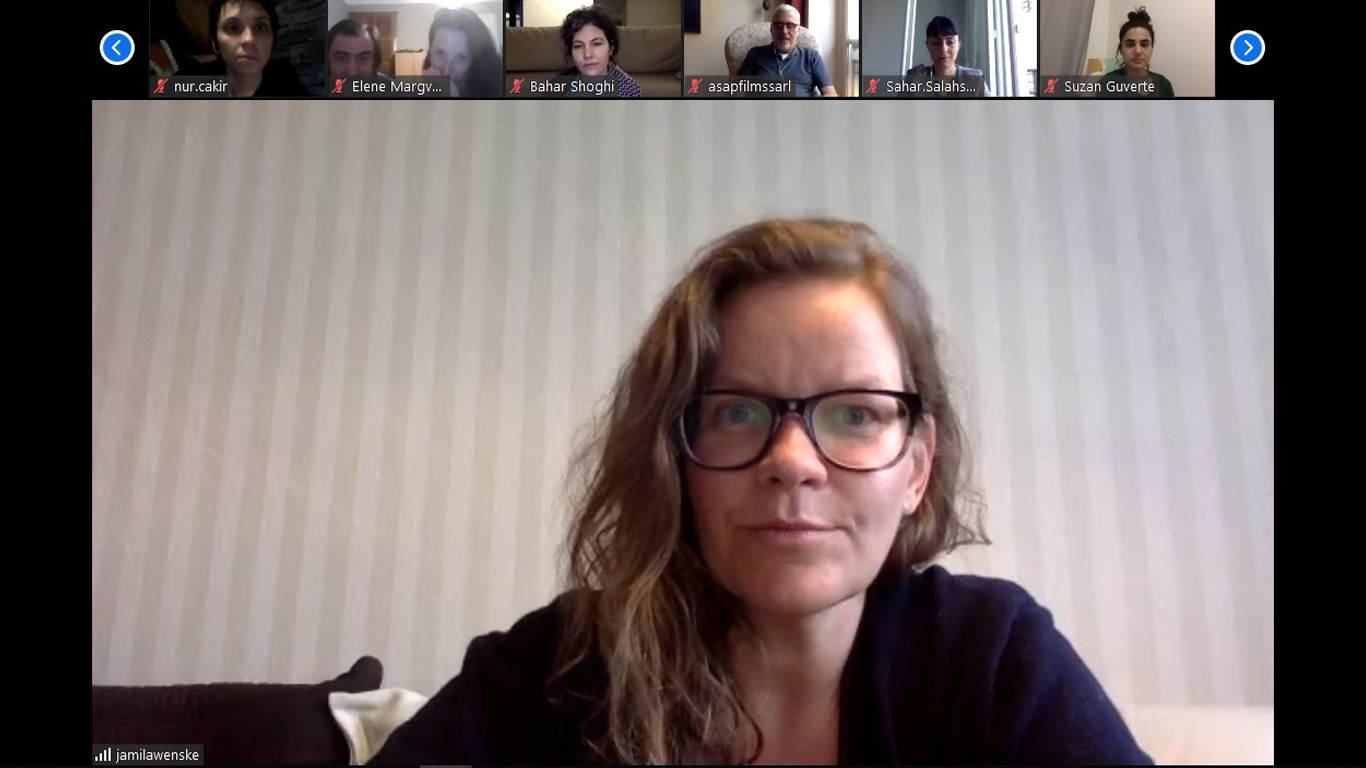 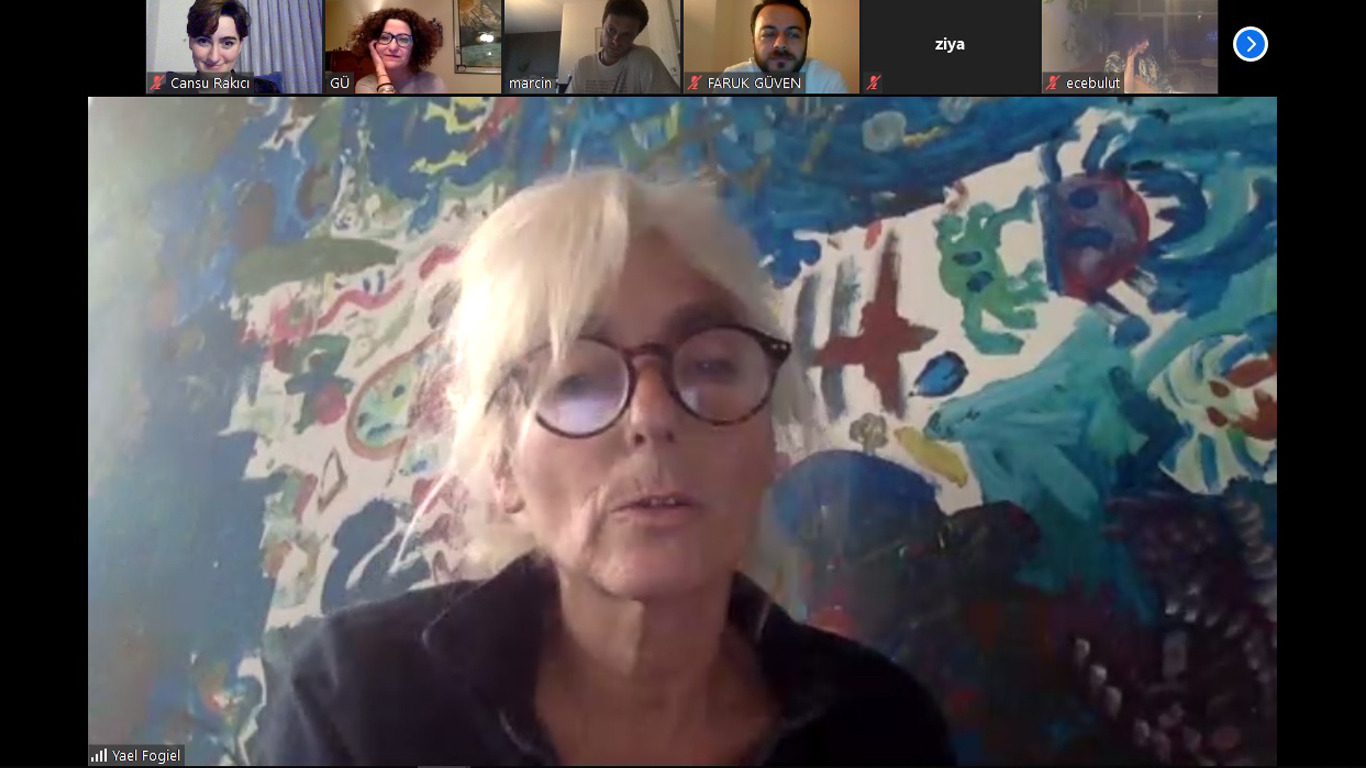 The director Ziya Demirel and the producer Annamaria Aslanoğlu of the project Two Eyeds received the Meetings on the Bridge Award of 30.000 TL. Jury’s deliberation: The meetings on the bridge award goes unanimously to the project Two Eyeds, as we were intrigued by director’s vision and his awareness of cinematic form, challenging narratives and his ability to jigsaw the puzzles of this multilayered project.

The Film Development Workshop and the Neighbours Platform projects were all eligible for the 8000 Euro CNC Award. The award was presented to Sahar Salahshoori, Bahar Shoghi, the directors and Mina Kesheveraz , the producer of the project Chronicle of a Winter: Tehran 1979. Jury’s deliberation: This project reveals an important but completely forgotten historical event. We are convinced that it can have a very strong echo today for Iranian women, women around the world, and anyone who struggle for freedom and rights.

Melodika Sound Award was presented to Ali Özkul, the director, Fırat Sezgin and Ceylan Özgün Özçelik, the producers of the project One of Those Creatures. Jury’s deliberation: We admire the team’s connection and vision to challenge a close relative on a screen, challenge a man and the raise important questions about the image, manhood and they take us on a difficult journey full of extreme physical and emotional experiences, which may need a beautiful touch of sound in order to immerse fully in this fascinating world.

The producers Alara Hamamcıoğlu and the director Melisa Önel of the project Suddenly received the GeniusPark Special Effects Award. Jury’s deliberation: Offers a very unique and strong point of view, we decided to support this project also for its strong formal ambitions.

The Mediterranean Film Institute (MFI) Script and Development Workshop Award was presented to the director Ali Vatansever and the producer Selin Vatansever and Oya Özden of the project Agony. Jury’s deliberation: For the bold exploration of a father-son's relationship and the overwhelming description of family ties being tested to the limit, as death challenges their expectations, the MFI Script Workshop Scholarship is awarded to Agony.

Se-yap Award, was presented to the director Salih Demir and producer Çekdar Erkıran for their project Treasure. Jury’s deliberation: The jury appreciated the courage to mix surreal-symbolic and realistic style and the idea of inserting the music in the narrative, not only for the illustration, but to provide meaning. All these elements setting up the promise of an original approach of cinema. But as we consider this can only be achieved with an understanding of the European market we decided that the SE-YAP Award will go for the producer of Treasure.

Transilvania Pitch Stop Award was given to the director Michael Önder and producer Jozef Amado of the project Pastoral. Jury’s deliberation: Transilvania Pitch Stop, the coproduction platform of the Transilvania International Film Festival that invites feature film projects of first and second time directors from Romania, Bulgaria, Serbia, Georgia, Moldova, Hungary, Greece, the Ukraine, Russia and Turkey. The event was supposed to be held 5-6 June 2020, but it might be postponed for the beginning of August, and will be organized in accordance with the restrictions existing then, which might transform it also in an on-line event. This year’s award will go for the family drama that promises comic elements Pastoral.

Postbıyık Sound Production Award, specific for the Neighbours selection was presented to the director Hussen Ibraheem and the producers Lara Abou Saifan and Tania El-Khoury, of the project Tide. Jury’s deliberation: Tide is a phenomenon, which is not limited to oceans. It can occur in any other system whenever a gravitational field that varies in time and space is present. After the tragic loss of their child the parents Zeina and Hassan are facing the impossibility of mourning in a field of gravity and a ticking clock. Like a wave of emotions the plot cought our attention because of the absurd but realistic scenario in a multi-national country and we hope that the sound post-production award in Istanbul opens the possibility for a co-production with Turkey.